Cloud computing is becoming more and more common. Everywhere we look it's cloud this and cloud that, and understandably so, because with the cloud, access is unlimited. When you use the cloud, you can access your data and work on documents from ANYWHERE instead of being beholden to your desk. Yet, as businesses and users make the switch to the cloud, one of the most common questions I get is “OK, so I have OneDrive and SharePoint...what's the difference again? They both seem to do the same thing, so which one should I use?” Here, we'll tackle all your SharePoint vs. OneDrive quandaries.

In all honesty, the SharePoint vs. OneDrive debacle isn't just a customer question. Even for those of us who use both regularly, it can be confusing to know which solution is best for each situation. While both SharePoint and OneDrive are Microsoft cloud storage products with common characteristics, there are some key differences between the two which decipher how and when one or the other should be used. Confusing, right? It can be, unless you have a system (hint: we've created one for you, plus a snazzy mnemonic to remember it). So, let's simplify it as we dive in to the similarities, differences and use cases for both

With both OneDrive for Business and SharePoint, you get the following:

Both OneDrive & SharePoint offer storage in Microsoft’s cloud space, which means that your data is securely stored within Microsoft’s vast network of datacenters. When you access your document, Microsoft seamlessly pulls it from one of these datacenters to your phone or PC, all without you even being aware of the security gymnastics happening in the background.

What exactly is a datacenter? Essentially, it is a very large facility housing servers which contain customer data. Think of a datacenter as a state of the art warehouse (or several warehouses) that have nothing but a TON of very large hard drives. So the cloud isn't just "somewhere", it does have a location. A very, very secure location, which brings me to my next point. Before that, however, check out this quick video (under 2 minutes) to understand datacenters even better:

Both OneDrive for Business and SharePoint include Microsoft security features ensuring your data stays safe at all times. All communication to and from OneDrive for Business and SharePoint across the Internet uses SSL/TLS connections. All SSL connections are established using 2048-bit keys. So, the entire time you access your data, it is encrypted to prevent unauthorized access.

This may sound like a bunch of gibberish, but to translate it, let me give you a mental picture: think of the connection between your computer and the datacenter as a tunnel. Before it enters the tunnel, your data is secure (see below (Encryption at Rest). When you access the data, it enters the tunnel and it's active encryption is steadfast. So, if an unauthorized person were to try and intercept this data before it reached its destination, all they would see would be a ton of garbled info. Do you remember creating a secret language with your friends as a kid? No one understood it, right? Well think of that (times a million) when you think of accessing your data. 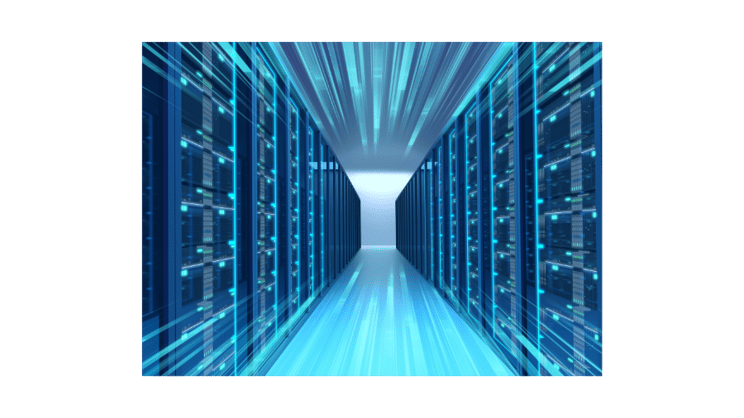 As I mentioned above, Microsoft also implements security features when your data is NOT being accessed, called “Encryption at Rest”. Encryption at rest includes two components:

BitLocker is deployed for OneDrive for Business and SharePoint Online across the service. While BitLocker encrypts all data on a disk, per-file encryption goes even further by including a unique encryption key for each file. Plus, every update to every file is encrypted using its own encryption key. Before they're stored, the keys to the encrypted content are stored in a physically separate location from the content. Every step of this encryption uses Advanced Encryption Standard (AES) with 256-bit keys and is Federal Information Processing Standard (FIPS) 140-2 compliant.

The encrypted content is distributed across a number of containers throughout the datacenter, and each container has unique credentials. These credentials are stored in a separate physical location from either the content or the content keys. Dashlane, a personal info, password and payment stronghold (similar to Keeper) explains that Advanced Encryption Standard is "now widely accepted as the strongest encryption there is—and used by governments, militaries, banks, and other organizations across the world to protect sensitive data.

To give you an example of just how secure 256-bit encryption is, Dashlane explains in this article how many combinations one would have to try to decrypt it: "The number of possible keys this system (256-bit) allows is 2 to the 256th power—that’s a number that is 78 digits long."

78 digits long! I'm feeling safe. How about you?

Data from both services can be accessed by the user from almost anywhere with a network connection.The main reason to use cloud-based storage is the ease of access. As a user, you can access your information from almost any device as long as you have internet access.

To give you a personal example, I was once on vacation when a co-worker reached out to me about a proposal I had worked on for a client pre-vacation. The deal wasn’t set to close for another two weeks, but it seemed that the client wanted to push things forward and needed the proposal ASAP. For someone without cloud storage, this would have been a complete nightmare. If I had stored the proposal solely on my computer for instance, there would have been nothing I could have done. Luckily, I had the proposal in my OneDrive, so I simply accessed it from my phone (while on the beach, mind you), downloaded it, and forwarded it to my co-worker all while sitting oceanfront, in a chair in the sand. Both my deal and vacation were saved. 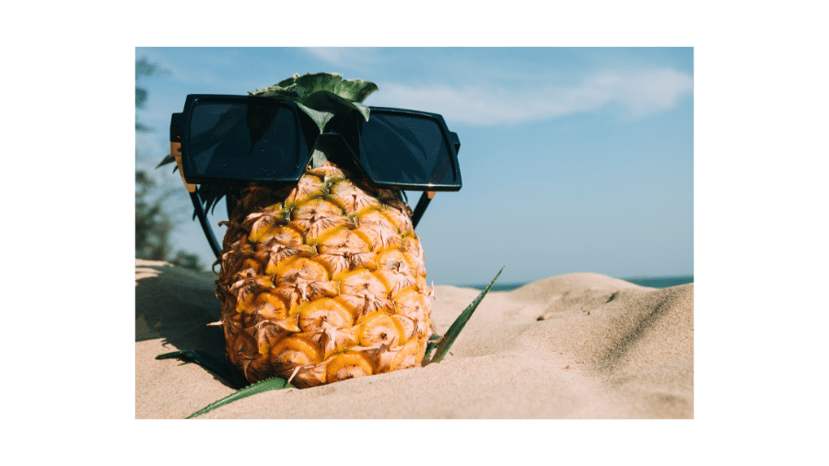 For all of the larger aspects OneDrive and SharePoint have in common, there a few key differences. (This will strictly be going over to storage aspect of the two.)

Storage use is where most of the confusion between the SharePoint and OneDrive comes into play. Yes, both options are great for cloud-based storage, but the main differentiation is what you’re going to be putting IN said storage. OneDrive is your own personal storage. This is where you'll want to put documents and files that you don’t want other people in your organization to access. For instance, perhaps you’re working on a document that you are not quite ready to share with your co-workers. In this case, you would want to store it in your OneDrive. While it's private, you do still have the ability to share the document with select people if and when you wish, but your organization as a whole will not have access to it without your express permission. 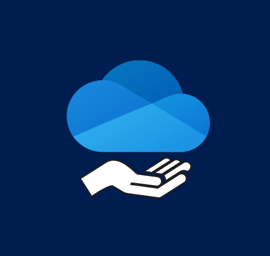 SharePoint, on the other hand, is your collaborative cloud storage. This is where you would store a document in which you want to collaborate with a group of co-workers. For example, lets say you’re working on a project that requires the contribution of several people. If you store this in SharePoint, anyone within your group will have access to view and even edit the document if you set the permissions to allow them to do so. SharePoint is also where everything within Teams is stored. This is because Teams in it’s essence, is a collaboration tool. 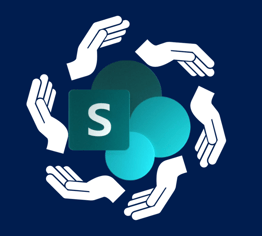 An easy way to remember the difference is this (here's that mnemonic I was telling you about!). Think of the “One” in OneDrive as in the storage for one person (you). Similarly, the “Share” in SharePoint is your shared storage where you want to keep things that are meant to be collaborated on. Easy, right? 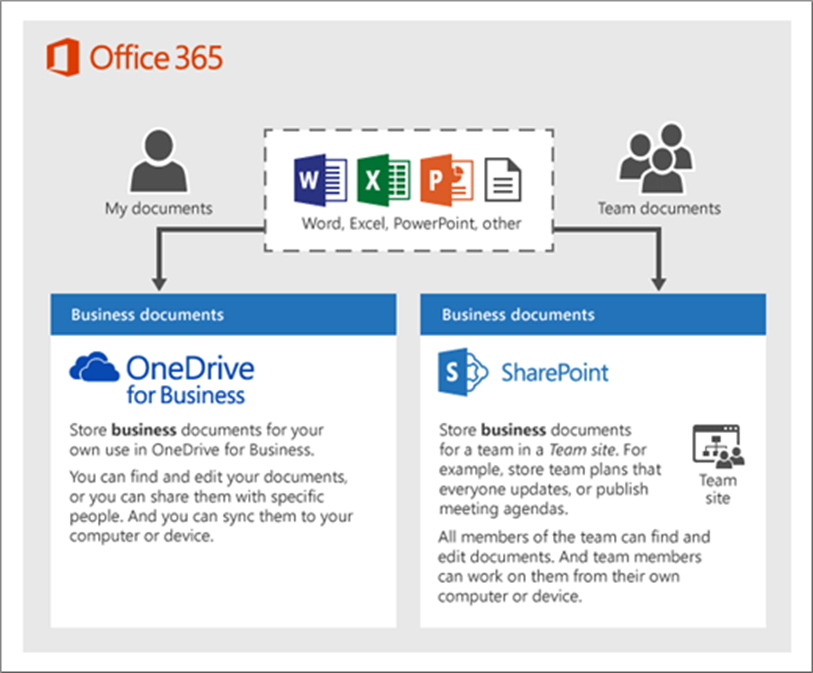 SharePoint and the Intranet:

OK, so I guess I lied when I said I would only be focusing on the storage aspect of these two but it’s hard to talk about SharePoint without mentioning its other capabilities. Besides collaborative storage, SharePoint can also be used to create an Intranet (internal webpages that only employees have access to) within your organization. An Intranet would be useful for an organization in need of a company webpage with employee-only resources. For instance, many HR webpages are Intranet pages that only current employees can access by logging in with their work credentials. An Intranet also provides a great locale for training materials, especially for those of you who utilize Microsoft Stream (Microsoft’s video streaming application) for training videos and such.

If you want to dig deeper into each offering's capabilities, check out this Microsoft Mechanics video:

How to Get SharePoint vs. OneDrive:

Now that you understand the necessity and interrelation of the two, perhaps you're wondering how to get OneDrive and SharePoint for yourself or your business. Well luckily for you, both are included in all versions of Microsoft 365 for Business and Enterprise. In fact, OneDrive and SharePoint are just two of a whole slew of applications and services offered in Microsoft 365. Here's a comparison (Apps and Services only. For a look at all comparisons i.e. Security and Windows 10 click here) across Microsoft 365 for Business options and their prices: 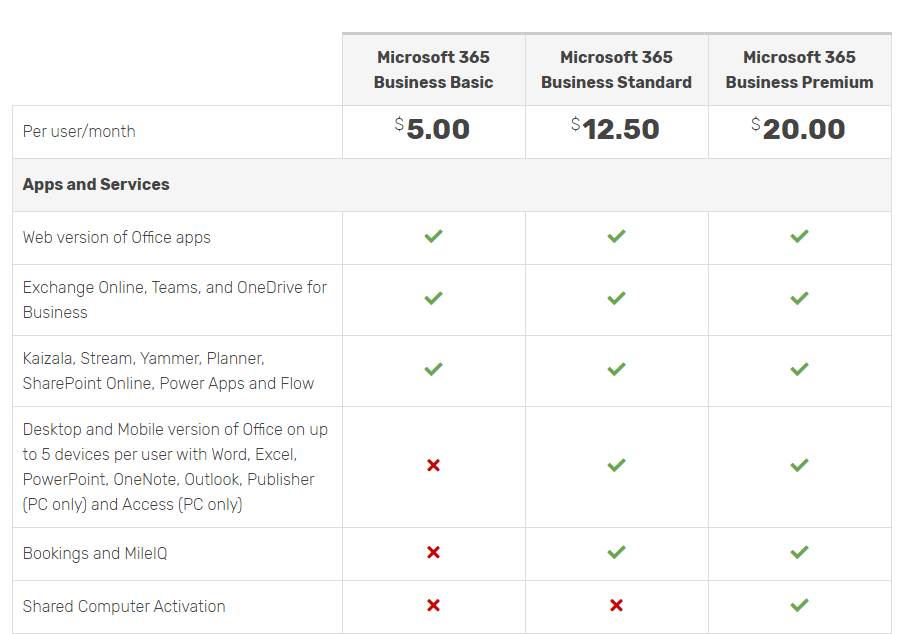 Here's a comparison (Apps and Services only. For a look at all comparisons i.e. Security and Windows 10 click here) across Microsoft 365 for Enterprise options and their prices: 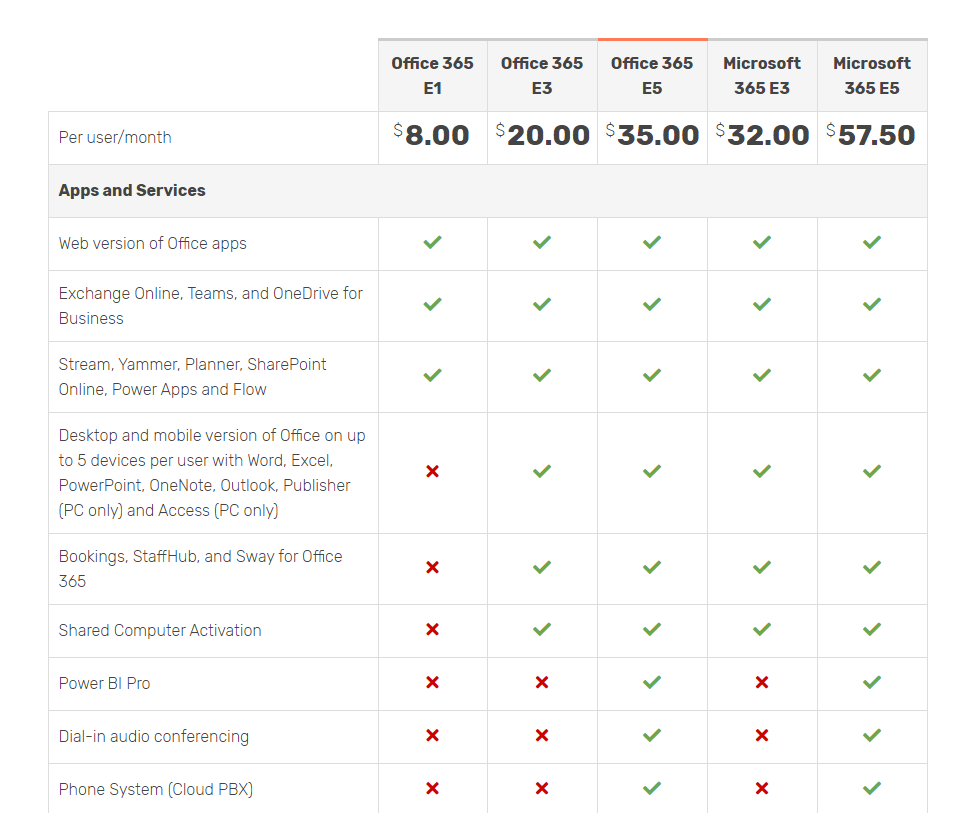 Click on the following links for specs on: Government, Education and Non-Profit  licensing.

Which is Better? SharePoint vs. OneDrive

Both SharePoint and OneDrive are extremely useful programs that you will undoubtedly utilize in combination, but which one you use when will depend on what you are wanting out of it. My guess is that most of you will utilize OneDrive more frequently than SharePoint due to the fact that it’s your personal cloud storage. However, now that you know the difference, the next time you have a document for collaboration, I’d recommend uploading it into a SharePoint site or Teams so that everyone in your group can access and work on it together from the start. Happy sharing and saving to the cloud!

Curious if your business could make use of the cloud? Click the button below to schedule a meeting:

Like what you've read? Know someone who could benefit from this? Use the share buttons below to spread the word 👇 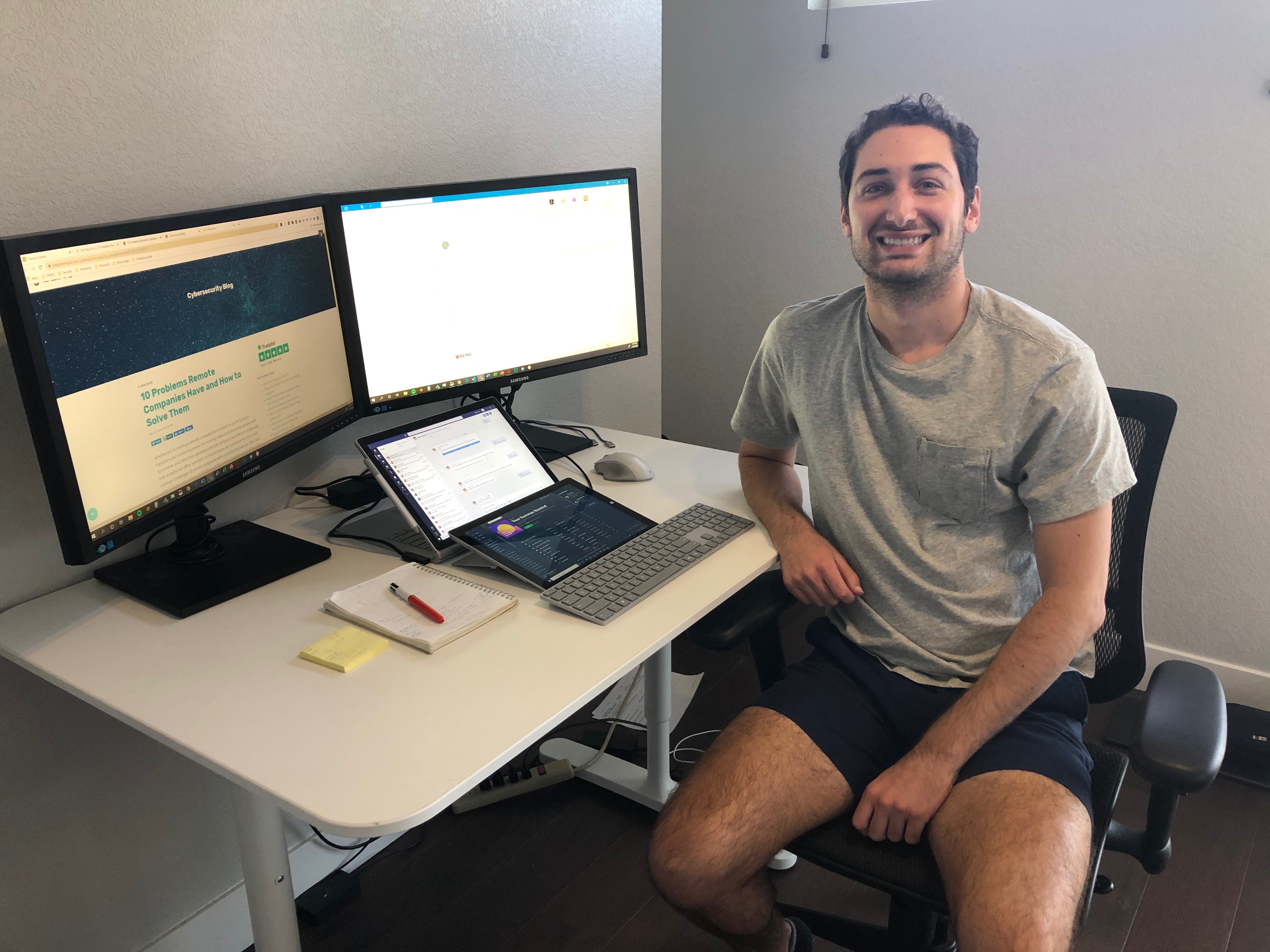 10 Challenges of Managing Your Virtual Team (and 10 WFH Solutions)

9 Tips for Meeting with Microsoft Teams 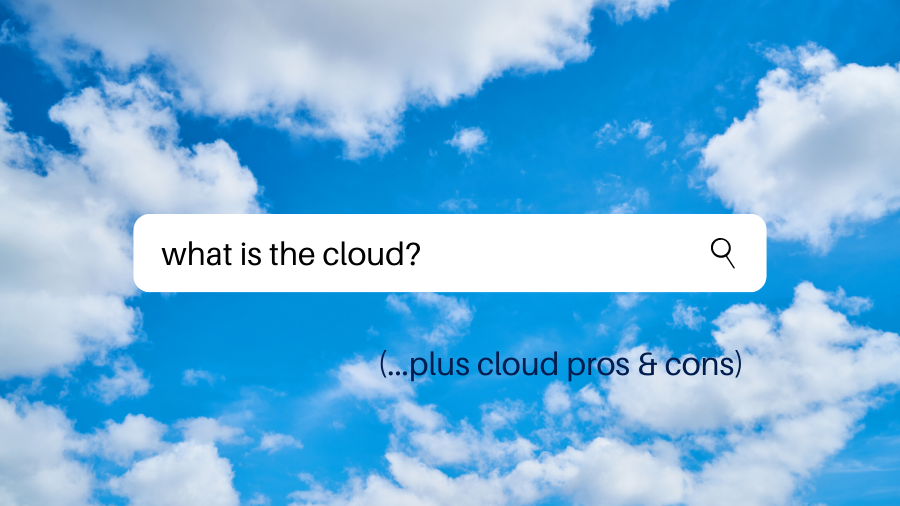 What is the Cloud? Plus: Cloud Pros & Cons

Cloud computing has been around for a while now, but it’s only more recently that it has become a major focus of businesses worldwide. More and more, companies are... 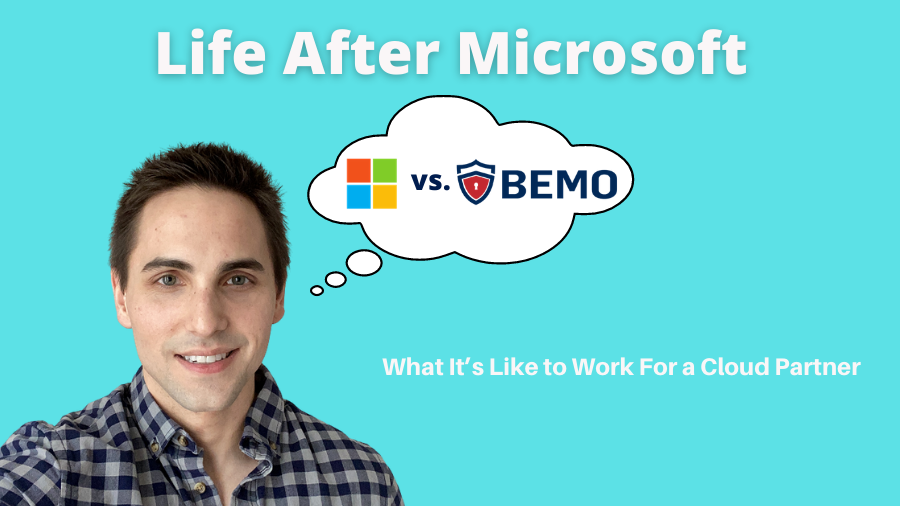 Life After Microsoft: What It’s Like to Work For a Microsoft Partner

Three months ago, I transitioned from my job as a Cloud Technical Expert at Microsoft, into a role as a Cloud Solutions Specialist with BEMO. Going from one side of...